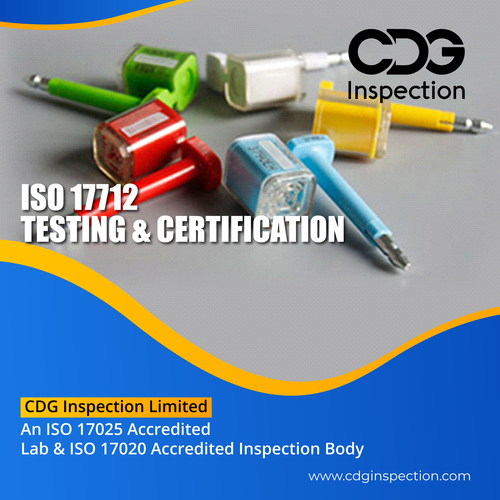 ISO 17712 is the standardised document that establishesuniform procedures for the classification, acceptance, and withdrawal ofmechanical freight container seals. It provides a single source of informationon mechanical seals which are acceptable for securing freight containers ininternational commerce.ISO 17712 defines three types of classes of securityseal strength, or barrier capacity, I for Indicative, S for Security and H forHigh Security. CTPAT requires the use of H class seals. Suppliers must useindependent third party test laboratories to validate a security sealsclassification. The test laboratory must also be accredited according to ISO IEC17025 General requirements for the competence of testing and calibrationlaboratories to perform testing specific to ISO 17712.The ISO 17712 standardrequires independent testing against three main categories,Mechanical Testing to determine a security seals physical strengthClause 5.H Class Security Seals or High Security Seals are manufacturedto the highest standards and are marked with a H on the seals body. The mostpopular high security seals are bolt seals and cable seals.In May 2014, newrequirements were published for ISO 17712 2013, for all security seals to becompliant, they must be categorized and marked H as High Security Seals. Whenundergoing mechanical testing by an independent ISO 17025 accredited laboratoryClause 5 and the manufacturer must be certified to both ISO9001 and ISO17712Annex A.Seals be designed and constructed with tamper indicative featuresthat generate tell-tale evidence of tampering Clause 6.The newrequirement for High Security Seals also states that the security seal mustalso be compliant with Clause 6 Evidence of Tampering. Clause 6 requires themanufacturer to have a documented and audited process and test specification inplace in its quality manual for all High Security Seals in its product range.Clause 6 is a valuable addition to the seal standard emphasizing the importanceof continuous improvement of tamper resistance and tamper indicating featureson security seals.If a High Security Seal is only presented toyou with a clause 5 certificate or just a clause 6 certificate then it does nothave the H classification, which means it is not a High Security Seal.Thefollowing products are H class Security Seals, 2K Klicker, MCLZ, and BarSeal.Auditing of manufacturers security related business processes Annex A.Poorsecurity related manufacturing practices can undercut the effectiveness of ahighquality security seal. ISO 17712s Annex A defines over two dozen requiredpractices, such as facility risk assessments and access controls to productionand storage areas. Suppliers conformance with Annex A should also bedemonstrated through an independent certification provider that is accreditedto audit compliance with the ISO standards.In order to verify that a HighSecurity Seal is certified as ISO 17712 2013, You must contact your securityseal supplier and ask them to provide the ISO certificates mentioned below, Themanufacturer of the seal has to be ISO 9001 certified.The manufacturer of theseal has to be ISO 17712 2013 Annex A Best Practices certified.The mechanicalstrength of the seal has to meet or exceed the requirements of ISO 17712 Clause5 High Security Seal category. This is documented by a ISO 17712:2013 Hlaboratory report, certificate for the seal.ISO17712 2013 Clause 6 TamperEvidence Compliance Letter.The test laboratory performing the strength testsmust be ISO 17025 accredited to perform ALL 5 mechanical tests according to ISO17712 2013 Clause 5. 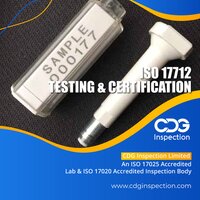