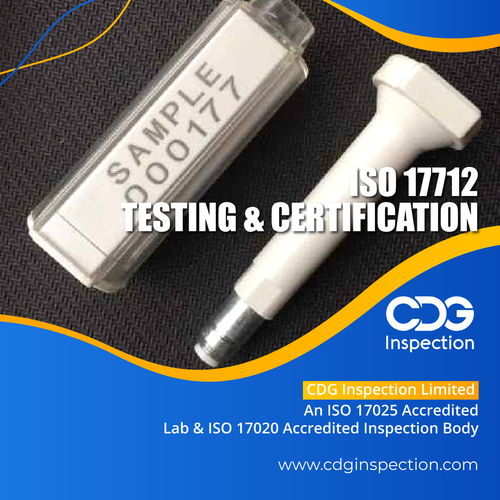 ISO 17712 2010 establishes uniform process for the classification, acceptance and withdrawal of receipt of mechanical freight container seals. It gives a single source of information on mechanical seals which are suitable for securing freight containers in international commerce. The reason of mechanical seals is, as part of a security system, to decide whether a freight container has been tampered with, i.e. whether there has been unauthorized entry into the container throughout its doors. Seals can be efficient only if seal users properly select, store, account for, apply, document and attend to seals prior to use and in use whilst these problems are not addressed in ISO 17712 2010, they are appropriate to successful use of the seals covered by ISO 17712 2010.International Standard ISO 17712 replaced ISOs Publicly Available Specification ISO PAS 17712 in September 2010. The Standard refined test processes and added a technical requirement for bolt seals. More significantly, the Standard added new test needs for tamper confirmation that applies to all seals that claim ISO compliance, regardless of type. Tamper confirmation test certification goes into effect 1 March 2012, after an 18 month transition period. General needs stipulate that mechanical security seals must be: Strong and durable against weather, chemical action and undetectable tampering. Easy to apply and seal. Permanently and uniquely marked and numbered. Marked with a simply particular manufacturers logo. Benefits of ISO Pas 17712 2010,When inspecting seals for signs of tampering, tamper evident seals should permit personnel, with the suitable training, to detect compromised seals easier. Decreased possibility of unauthorized material being inserted into containers or other instruments of international traffic IIT. Reduced possibility of cargo theft or tampering. Decreasing shipping delays that result when seals are misplaced or broke. In order to verify that a High Security Seal is certified as ISO 17712 2013, contact your security seal supplier and ask them to submit the ISO certificates mentioned, The manufacturer of the seal has to be ISO 9001 certified. The manufacturer of the seal has to be ISO 17712 2013 Annex A certified. The mechanical strength of the seal has to meet or exceed the requirements of ISO 17712 Clause 5 High Security Seal category. This is documented by a ISO 17712 2013 H laboratory report / certificate for the seal. ISO17712: 2013 Clause 6 Tamper Evidence Compliance Letter. The test laboratory performing the strength tests must be ISO 17025 accredited to perform ALL 5 mechanical tests according to ISO 17712:2013 Clause 5. The new requirement for High Security Seals is that they must also be compliant with Clause 6: Evidence of Tampering. Clause 6 requires the manufacturer to have a documented and audited process and test specification in place in its quality manual for all High Security Seals in its product range. Clause 6 is a valuable addition to the seal standard emphasizing the importance of continuous improvement of tamper resistance and tamper indicating features on security seals.