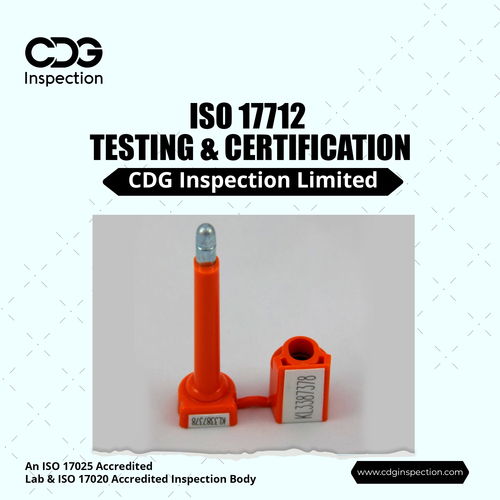 ISO 17712 is a set of rules whichestablish procedures for the unification and classification of securityseals for fitting on mechanical cargo containers. It definesthe types of seals that can be used for this purpose, but also establishesthe basic general requirements and tests that seals mustpass in order to be certified under this standard. Compliance with theseregulations is an essential requirement for security seals to be acceptedfor domestic and international transport of goods. General requirements forseals specified by ISO 17712.ISO 17712 requires that all security sealshave the following general features, Security seals must be unique, difficultto imitate and be marked with the corresponding information. Thedesign should be easy to inspect and to determine whether it is beingused properly or its application is defective. No room must be left for doubt. Securitybolt seals must be at least 18 millimetres in diameter. They are singleuse devices by removing them, the seals must be destroyed and become unusable.They have to show clear proof in case of inviolability. They must meet thethresholds of strength specified by the standard and pass all the tests towhich they are submitted at the accredited bodies. Three types of seals allowedby ISO 17712.ISO 17712 defines the various types of certified cargocontainer seals. There are three of these,1. Indicating seals, Theyare plastic or metallic seals that are easy to open after they arefitted. As container seals, this type is used on empty containers which have tobe moved over short distances, for example, in the same city. These sealsensure that the container is clean and suitable for loading. Of course,the indicating security seals must bear the regulatorymarking including the numbering and the logo of thecompany.2. Security seals Locking this type of seal already providesgreater security, in order to prevent the unauthorized opening of cargocontainers. The difference between this category of seals and the next isthat security in this case is more restricted. In any case, if a seal hasbeen broken, it must be evident during an inspection. They are also marked with numericalinformation and the logo.3. High security seals They are madeof extremely strong materials such as metal, or theyincorporate steel cable. The ultimate purpose of this type of seals isto prevent and hinder at all costs any attempt to open or tamper withthem. In addition, advanced special tools are needed for its removal.The most commonly used type of marking for these seals is by laser, due toits excellent resistance to environmental aggression. The letter H from HighSecurity Seals defines the classification of this type of seal. Mechanicalstrength tests in ISO 17712,Security seals certified in accordance with thestandard must comply with specific tests in relation to tensile, cuttingand impact strength. These tests must be carried out in institutions accreditedby the regulations. Let us see in detail what they consist of, Tensile strengthdefines the strength of the security mechanism, which must be greater than1,000 kg. It consists of pulling the ends until they eventual separate. Cuttingboth in security bolt seals and those with metal cables, the cutting strengthmust be greater than 340 kg. Lateral impact this test consists of striking thesecurity bolt seal perpendicularly in an attempt to break it. Tests theflexibility of the seal shaft and its ability to bend. Vertical impact in thiscase, the impact may come from any angle until the seal is broken. Responsibility in the handling of security seals forcontainers,1. Responsibilities of security seal users, The userof security seals should follow the best usage practices of seals asdiscussed in our article. In summary, these include the obligation to keepa detailed log of the seals and their breakage where appropriate,the conservation of the seals and monitoring of the applicationprocess. Of course, all this must be supervised by a responsible persondesignated by the company.2. Responsibilities of security seal manufacturers, However, securityseal manufacturers must also meet the following obligations, Keepa log of all seals manufactured, as well as the numbering and markings inorder to prevent duplicates and keep the information at hand. Certify thatthe manufacturing process complies with the criteria of strength andthe materials specified by ISO 17712.Have an adaptedcustomization service. Have a direct contact with specialists toprovide solutions to any issues that may arise concerning security seals forcontainers. Documents that certify compliance with ISO 17712.To provethat security seal manufacturers complies with ISO 17712 regarding themanufacture of seals for containers, they must provide the following documents,Annex A of ISO 17712 which guarantees that it respects best practice.The certificate that the security seals exceed or comply with the minimumtensile strength specified in clause number 5 in the category of highsecurity seals. The document which accredits the tests that have beencarried out in the laboratory to prove the mechanicalstrength of the seals.